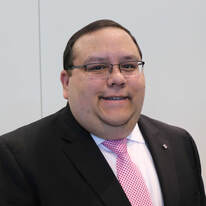 With the Center since 2011, Chris Pierno is the Catholic Apostolate Center's Manager of Marketing & Consulting. In this role, he oversees the Center's marketing program and coordination of consulting services. He also supports the staff in areas of  graphic design, advancement, public relations, administration, and strategic planning for the Center. Chris also is a co-host for the Center's premier podcast, OnMission.

He holds a master's degree in management, and a bachelor's degree in politics, with a minor in theology from The Catholic University of America. Chris also serves as President of the University's Alumni Association. In addition to his work for the Center, Chris is the Director of Operations at the Conference of Major Superiors of Men. He has also worked in marketing and fundraising, specializing in faith-based copywriting and design for both non-profit and higher education clients. In his free-time, Chris volunteers with the Knights of Columbus, where he holds several positions including State Deputy for the District of Columbia, Former District Deputy, and Past Grand Knight. He and his wife have a young son named Vincent, named in honor of St. Vincent Pallotti.
For a sampling of his writings, presentations, and other work, please click below: ​
Christopher Pierno SELECTED RESOURCES AND PRESENTATIONS