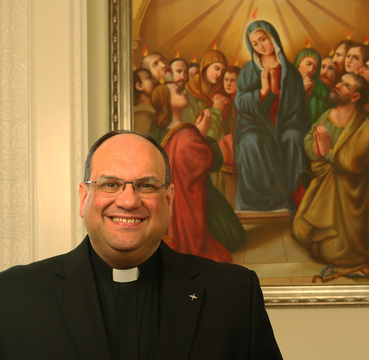 Fr. Frank S. Donio, S.A.C., D.Min. is Director of the Catholic Apostolate Center and a member of the Society of the Catholic Apostolate (Pallottine Fathers and Brothers). He is also Interim Executive Director of the Conference of Major Superiors of Men of the United States (CMSM). His academic background, teaching, presenting, pastoral and administrative work are focused primarily around evangelization, spiritual formation, and pastoral practice that fosters greater co-responsibility and collaboration among all the baptized.
​
He holds additional provincial, national and international leadership positions in the Pallottines and in the Union of Catholic Apostolate (UAC), an international public association of the faithful founded by St. Vincent Pallotti in 1835. Fr. Frank is former Provincial Rector of the Immaculate Conception Province of the Society of the Catholic Apostolate. Some of his other prior assignments include Provincial Director of Formation, Pastoral Director of St. Jude Shrine in Baltimore, MD and Chaplain of Bishop Eustace Preparatory School in Pennsauken, NJ.

He is a Consultant to the Committee on Evangelization and Catechesis of the United States Conference of Catholic Bishops. He also collaborated with the Conference on the development of Living as Missionary Disciples: A Resource for Evangelization and on the Convocation of Catholic Leaders. Fr. Frank served as Consultant to the Archdiocese of Baltimore for pastoral planning and assisted in the development of its Be Missionary Disciples planning process.

Fr. Frank writes, presents and gives numerous interviews on evangelization, co-responsibility and collaboration in ministry and apostolate, pastoral planning, Church leadership and management, and Catholic and Pallottine spirituality. He has spoken at various colleges and universities, schools of Theology, dioceses, and national and international conferences as well as on radio, television, and podcasts. He also provides consultation to Catholic dioceses, religious communities, and organizations in the United States and internationally. Fr. Frank and the Center are recipients of the Gaudium et Spes Award from the National Association for Lay Ministry. The award is its highest honor and recognizes an outstanding individual or organization for promoting understanding of the Church in the world according to the vision of Vatican II.

He is a Lecturer in the undergraduate Theology program in the School of Theology and Religious Studies at The Catholic University of America. He is also an Adjunct Professor at St. Joseph's College of Maine in the online Theology program and at Fordham University in the Graduate School of Religion and Religious Education. He teaches in the areas of Catholic mission, pastoral ministry, spirituality, ecclesiology, and Church management and leadership. Fr. Frank is a recipient of the Part-Time Faculty Award for Teaching Excellent in Ecclesiastical Schools from The Catholic University of America.

Fr. Frank has an extensive background in young adult ministry, particularly at the collegiate level, and has assisted pastorally at various universities in Maryland and the District of Columbia over the last twenty-two years. Currently, he assists the Office of Campus Ministry at The Catholic University of America.

He is also significantly involved in chaplaincy with the Knights of Columbus, including three terms as State Chaplain of the District of Columbia, and serving currently as Chaplain of The Catholic University of America Council 9542. While in Baltimore, he served as a chaplain of the Baltimore City Fire Department.

Born in 1966, Fr. Frank is originally from Hammonton, New Jersey, the oldest of four sons of Frank (deceased) and Angela Donio. He made his first consecration as a Pallottine in 1986 and his ordination to the priesthood was in 1994.
For a sampling of his Writings, Presentations, and Speaking, including on EWTN's Son Rise Morning Show, please click below:
Fr. Frank Donio, S.A.C. Selected Resources and Presentations